A Look to Balinese Culture and Traditions

A Look to Balinese Culture and Traditions

The people of Bali are very aware of their ethnic identity.  When you visit the country, you are treated to traditional dance performances, amazing carvings and paintings as well as many other cultural and religious festivities.  Hinduism took root on the island in the 15th and 16th Century when the Princes of Java fled Majapahit at the advance of Islam.  Bali was a place of refuge for them and they, as well as their culture, were assimilated into the culture they found there. Now, let’s have a read on Balinese culture and traditions.

Society
In Bali, the society is stratified.  The caste system uses the same terminology used by the people of India.  There is the Brahman class, Kshatriya and Vaishya.  In Bali however, their idea of occupational specialization or ritual contamination has been done away with.  This means that men and women can marry across castes.  However, women are not allowed to marry men that are beneath their caste class.  Shudra class, which is the commoner or servant class, is where many of the Balinese fall.  This caste includes prominent politicians and wealthy entrepreneurs. 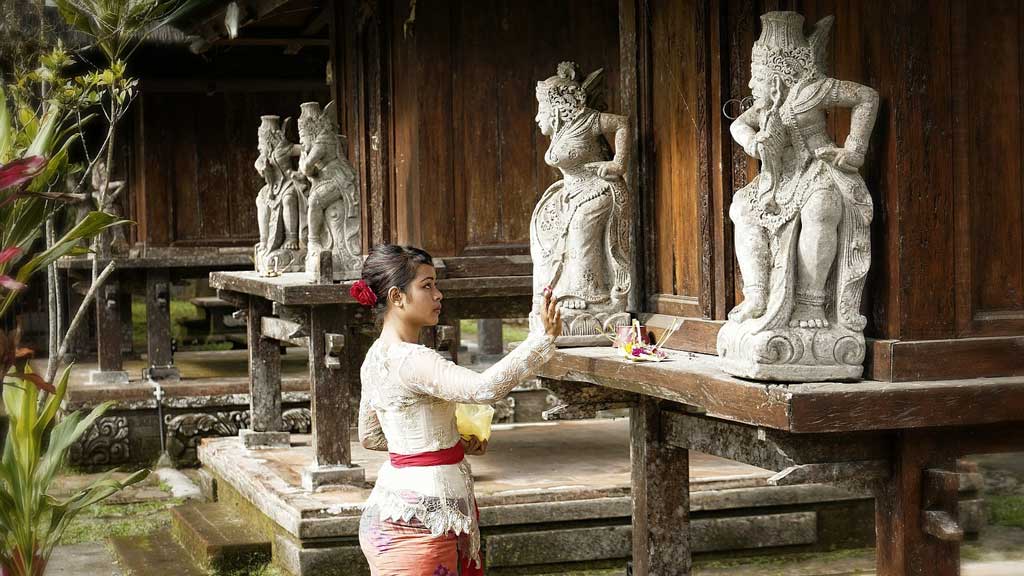 Descent Groups
Beyond the family into which one is born, the Balinese are also divided into various corporate groups.  Among this is a patrilineal descent group known as a dadia.  These are people who share a common ancestor through a male line.  Such a group will often have a temple built to honor that ancestor, their own leaders and put together money to support the rituals that are associated with their ancestral temple.  When it is time to look for a spouse, the Balinese look towards this group.  They also become business partners by organizing economic activities for mutual benefit. This is an agricultural society and the members work together to offer sacrifices at their temple which is usually located in the middle of their collective rice paddies.  They also organize how the water will flow to the rice paddies, the planting and the harvesting of rice.

Village Compound
Each Balinese is a member of a village compound also known as a banjar.  This is not the same as a dadia but can overlap with it.  It is at this level that they form inter-village alliances to deal with security issues and work together to benefit from the tourists who visit. The banjar can form weaving clubs, dance troupes and even an orchestra.  When there is need for cremation of a body, they mobilize the labor and resources needed for the process.